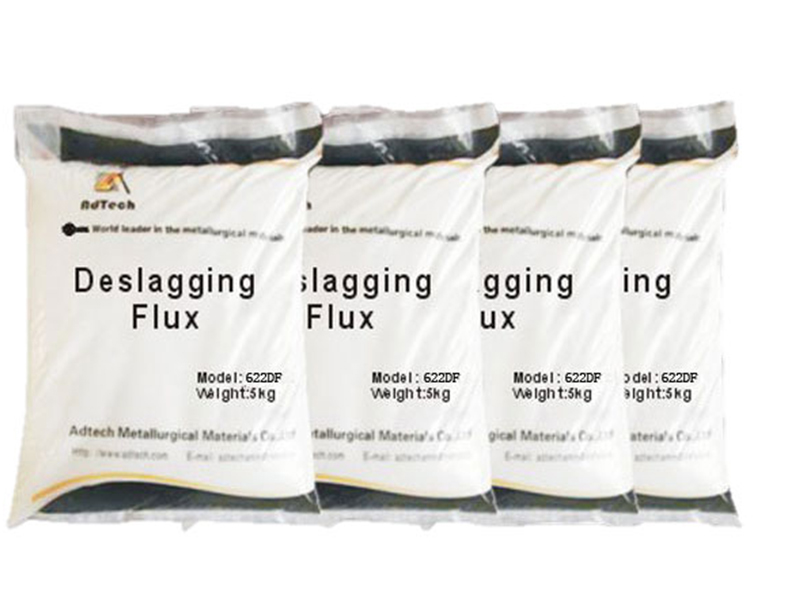 Degassing Fluxes
Hydrogen, found in the foundry primarily due to the decomposition of water vapor, is very soluble in liquid aluminum alloys, but much less so in the solid phase. When aluminum solidifies, the excess dissolved hydrogen comes out of solution and forms bubbles, from pinhole size to much larger sizes. Metal which has not been degassed before casting is vulnerable to this type of defect. Degassing fluxes remove hydrogen, and also oxides and other impurities.

Exothermic Fluxes
Fluxes of this type are applied to dross for the purpose of releasing metal trapped in the dross and thus reducing melting losses.

Furnace Wall Cleaning Fluxes
Oxide buildup on furnace walls tends to deteriorate the life of the furnace, as well as making work more difficult and decreasing the volume of the furnace. If the buildup is not kept in check, the oxides can form corundum, a material which is very difficult to remove. Wall cleaning fluxes soften the buildup and make it easier to scrape away.

Aluminum is chemically very active. A tough film or skin of aluminum oxide forms quickly on all freshly exposed surfaces, especially in the molten state. Scrap or ingot additions to the melt, stirring and agitation cause aluminum oxide to be suspended in the melt. If these oxides are included in the cast product, they may lead to defects, so they must be removed from the melt. Most oxides are of aluminum, but alloying elements such as magnesium, iron, copper and titanium also can form their oxides.

Cleaning fluxes are necessary to remove oxides from the melt, while cover fluxes act as a barrier for the surface of the melt against oxide formation. The same flux can generally be used for both purposes.

Fluoride compounds in the flux increase its effectiveness and allow it to be used at lower temperatures. However, fluorides can release harmful fumes, and as a result, for environmental reasons some foundries prefer to use low-fluoride fluxes. Sodium-free fluxes are used in hypereutectic alloys (>12% silicon content), since sodium can interfere with phosphorus grain refining. The fluxes available for different temperature ranges differ primarily in their melting points.

Sodium Modifying Fluxes
For hypoeutectic alloys containing silicon, addition of sodium or strontium results in a modified silicon structure that brings about improvement in mechanical properties (tensile strength or elongation) and castability. In modified alloys casting shrinkage during solidification is dispersed instead of localized in large cavities. Sodium modification is also very effective in the prevention of shrinkage porosity.

Grain Refining Fluxes
Grain size in aluminum alloys refers to size of individual aluminum crystals in a cast piece. The size of these crystals is directly related to the number of grains or nuclei formed in the earliest stages of solidification; the more grains, the finer the grain size. Coarse grain size increases the difficulty of feeding and lowers the soundness and mechanical properties of a casting. Grain refining makes the grains smaller by increasing the number of crystallization nuclei early in solidification, much like seeding a rain cloud with dry ice.

Advantages of grain refining include:
Dispersion of porosity.
Prevention of hot tears.
Improved pressure tightness through prevention of blowholes.
Titanium, boron, and zirconium are popular grain refiners. For hypereutectic alloys, where silicon precipitates before aluminum, phosphorus is used for grain refinement.