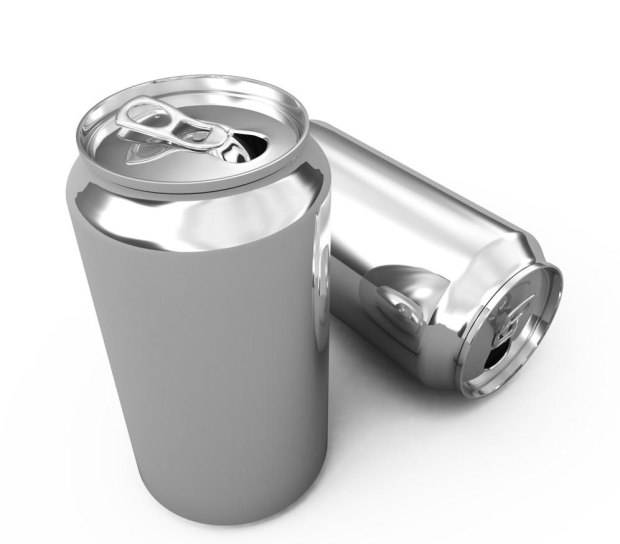 Ninety-five percent of all beer and soft drink cans in the United States are made of aluminum.
American can makers produce about 100 billion aluminum beverage cans a year, equivalent to one can per American per day.
While almost all food cans are made of steel, aluminum’s unique properties make it ideal for holding carbonated beverages.
The typical aluminum can weighs less than half an ounce, yet its thin walls withstand more than 90 pounds of pressure per square inch exerted by the
carbon dioxide in beer and soft drinks.
Aluminum’s shiny finish also makes it an attractive background for decorative printing, important for a product that must grab the attention of
consumers in a competitive market.

Aluminum was first identified as an element in 1782, and the metal enjoyed great prestige in France, where in the 1850s it was more fashionable than
even gold and silver for jewelry and eating utensils.
Napoleon III was fascinated with the possible military uses of the lightweight metal, and he financed early experiments in the extraction of
aluminum. Although the metal is found abundantly in nature, an efficient extraction process remained elusive for many years.
Aluminum remained exceedingly high-priced and therefore of little commercial use throughout the 19th century.
Technological breakthroughs at the end of the 19th century finally allowed aluminum to be smelted cheaply, and the price of the metal fell
drastically. This paved the way for the development of industrial uses of the metal.

Aluminum was not used for beverage cans until after World War II. During the war, the U.S. government shipped large quantities of beer in steel cans
to its servicemen overseas.
After the war most beer was again sold in bottles, but the returning soldiers retained a nostalgic liking for cans.
Manufacturers continued to sell some beer in steel cans, even though bottles were cheaper to produce. The Adolph Coors Company manufactured the first
aluminum beer can in 1958. Its two-piece can could only hold 7 ounces (198 g), instead of the usual 12 (340 g), and there were problems with the
production process. Nevertheless, the aluminum can proved popular enough to incite Coors, along with other metal and aluminum companies, to develop
better cans.

The next model was a steel can with an aluminum top.
This hybrid can had several distinct advantages. The aluminum end altered the galvanic reaction between the beer and the steel, resulting in beer
with twice the shelf life of that stored in all-steel cans.
Perhaps the more significant advantage of the aluminum top was that the soft metal could be opened with a simple pull tab.
The old style cans required the use of a special opener popularly called a “church key,” and when Schlitz Brewing Company introduced its beer in an
aluminum “pop top” can in 1963, other major beer makers quickly jumped on the band wagon.
By the end of that year, 40% of all U.S. beer cans had aluminum tops, and by 1968, that figure had doubled to 80%.

While aluminum top cans were sweeping the market, several manufacturers were aiming for the more ambitious all-aluminum beverage can. The technology
Coors had used to make its 7-ounce aluminum can relied on the “impact-extrusion” process,

Where a punch driven into a circular slug formed the bottom and sides of the can in one piece.
The Reynolds Metals company introduced an all-aluminum can made by a different process called “drawing and ironing” in 1963, and this technology
became the standard for the industry. Coors and Hamms Brewery were among the first companies to adopt this new can, and PepsiCo and Coca-Cola began
using all-aluminum cans in 1967.
The number of aluminum cans shipped in the U.S. rose from half a billion in 1965 to 8.5 billion in 1972, and the number continued to increase as
aluminum became the nearly universal choice for carbonated beverages.
The modern aluminum beverage can is not only lighter than the old steel or steel-and-aluminum can, it also does not rust, it chills quickly, its
glossy surface is easily imprintable and eye-catching, i