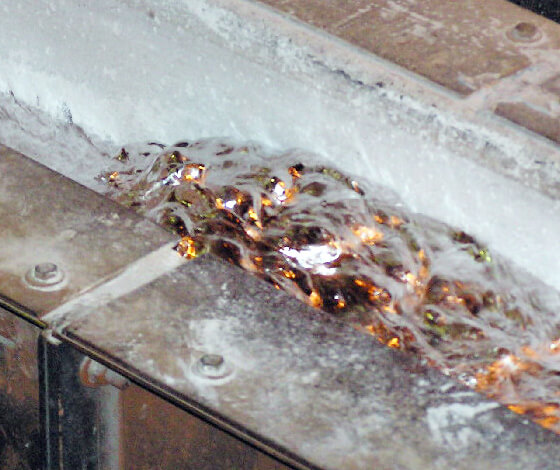 The aluminum oxide film has low permeability to hydrogen atoms, it slows down the reaction of the interaction of the melt with atmospheric moisture.
At a film thickness of 1-10 microns, gas exchange between the metal and the atmosphere practically ceases.
The composition of the alloy is greatly influenced by the composition of the film.
All elements that increase the oxidation of aluminum (magnesium, lithium, sodium, strontium, calcium) increase the permeability of the oxide film to hydrogen.
Alloying elements (copper, zinc, silicon) have little effect on gas exchange.
They somewhat loosen the oxide film and therefore contribute to a more rapid saturation of the alloys with hydrogen.

The hydrogen permeability of the oxide film is significantly affected by the composition of the atmosphere above the melt.
The permeability of the film increases significantly if Cl2, C2Cl6, BF4, SiF4, freons and other halogens are present in the gas medium. Chlorides, having a high affinity for aluminum, are adsorbed, penetrate under the oxide film and destroy it as a result of the formation of gaseous aluminum chloride.
Fluorides interact less actively with aluminum. Interacting with the oxide film, they contribute to the dehydration of its surface and the desorption of molecules and oxygen atoms.
Having a high adsorption capacity, fluorides occupy the released active centers on the film and create oxyfluoride complexes of the Al2O2F2 type, which stop the access of oxygen and water vapor to the melt, make the film thin and permeable to hydrogen.
Liquid fluxes containing fluorides also destroy the oxide film and facilitate the degassing of melts.

Adtech China provide the aluminium degassing machine and the refining flux for the Refining of Molten Aluminium. (sales@adtechamm.com)

To the Refining of Molten Aluminium, Dissolved hydrogen, released during crystallization of the melts, causes the formation of gas and gas-shrink porosity in the castings.
With increasing hydrogen concentration, the gas porosity of the castings increases.
The predisposition of aluminum alloys to gas porosity is determined by the degree of supersaturation of the solid solution with hydrogen, which is expressed by the ratio η – (Cg – Stv) / Stv, where Cg and Ctv are the hydrogen concentrations in the liquid and solid alloy, cm3 / 100 g. Gas porosity is not formed when Cn = sr.
The degree of supersaturation of the solid solution increases with increasing cooling rate.

For each alloy, there are limiting concentrations of hydrogen, below which there is no formation of gas pores in the castings at given cooling rates.
So, for example, in order to prevent the formation of gas pores during hardening of thick-walled castings from Al – 7% Si alloy, the hydrogen content in the melt should not exceed 0.15 cm3 per 100 g. The maximum hydrogen content in duralumin is 0.12-0. 18 cm3 per 100 g, depending on the intensity of cooling during crystallization.

Protection of aluminum melts from oxidation and absorption of hydrogen is achieved by melting under fluxes in a slightly oxidizing atmosphere.
A mixture of sodium and potassium chlorides (45% NaCl and 55% KCl) in an amount of 1-2% of the mass of the charge is used as a coating flux in the melting of most alloys containing no more than 2% Mg.
The composition of the flux corresponds to a solid solution with a minimum melting point of 660 ° C.
For this purpose, a more complex flux is also recommended (Table 12).

For aluminum-magnesium alloys, carnallite (MgCl2 * KCl) and mixtures of carnallite with 40-50% barium chloride or 10-15% calcium fluoride are used as a coating flux.
If the use of flux is not possible, protection against oxidation is carried out by the introduction of beryllium (0.03-0.05%).
Protective fluxes are widely used in the melting of alloys in reflective furnaces.
To prevent interaction with moisture, measures are taken to remove it from the lining of melting furnaces and casting devices, from refining and modifying fluxes; subjected to calcination and painting, a melting and casting tool, produce heating, cleaning and drying of charge materials.
However, no matter how carefully the melt was protected, when melted in air, it always turns out to be contaminated with oxides, nitrides, carbides, inclusions of slag and flux, and hydrogen, so it must be cleaned before pouring into molds.

For purification of aluminum alloys from suspended non-metallic inclusions and dissolved hydrogen, sedimentation, purging with inert and active gases, treatment with chloride salts and fluxes, evacuation, filtering through mesh and granular filters, electroflux refining are used.
As an independent process, sedimentation can be applicable in cases where the density difference is large enough and the particle size is not too small. Ho, and in these cases the process is slow, higher fuel consumption is required and it is ineffective.
The purification of melts by blowing with inert or active gases is based on two processes of diffusion of dissolved gas into bubbles, and the blowing and floating action of the bubbles with respect to inclusions and tiny gas bubbles. Refining is carried out the more successfully, the smaller the size of the bubbles of the purged gas and the more uniform their distribution over the volume of the melt. In this regard, the processing method deserves special attention.