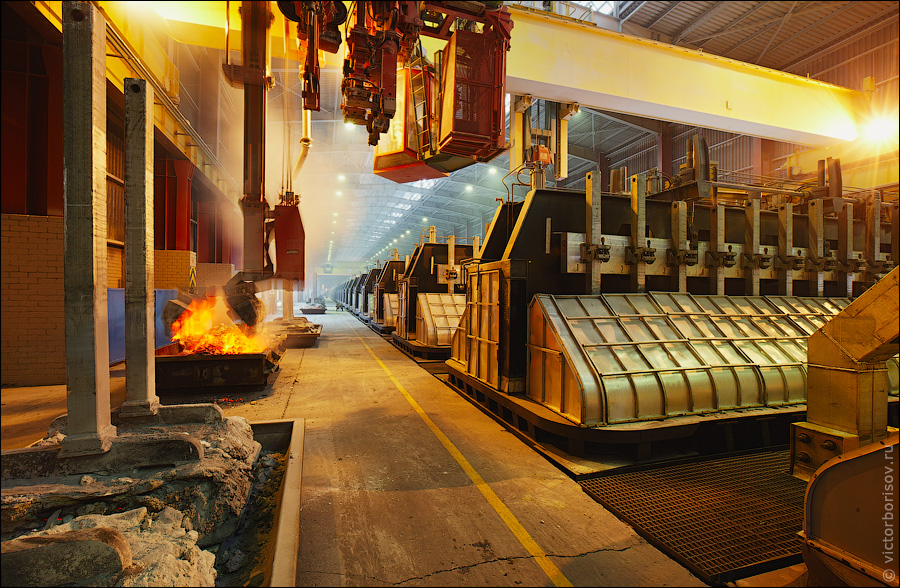 Kazakhstan Electrolysis Plant JSC (KEZ), part of ENRC (Eurasian Natural Resources Corporation), is the only primary aluminum plant in Kazakhstan. The plant is located in Pavlodar. Opened in 2007. It includes an electrolysis workshop, a foundry, anode manufacturing workshop and other auxiliary departments. A metallurgical cluster with a full production cycle has been formed on its basis: the extraction of bauxite, the production of alumina, the production of “winged metal”. Currently, the plant’s production capacity is 125,000 tons per year. Aluminum is produced in twenty-kilogram bars of grade A-85 (contains 99.85% aluminum).

Meanwhile, we will begin to study the technology of aluminum production in photographs.

general information
Aluminum is a chemical element of the third group of the periodic system of elements of D. I. Mendeleev. In terms of its content in the earth’s crust, aluminum ranks first among metals and third among other elements (after oxygen and silicon). The earth’s crust is 8.8% aluminum (for comparison, the content of iron in the earth’s crust is 4.2%, copper – 0.003, gold – 0.000005%). In nature, aluminum is found only in the form of various and very diverse compounds. Most of them are aluminum oxide – in everyday life it is called alumina, or simply clay. Clay consists of about one third of aluminum oxide and is a potential raw material for its production.

Aluminum has a number of properties that distinguish it from other metals. This is a low density of aluminum, good ductility and sufficient mechanical strength, high thermal and electrical conductivity. Aluminum is non-toxic, non-magnetic and corrosion resistant to a number of chemicals.

The process for producing aluminum consists of two main stages:

• Obtaining alumina (Al2O3) from aluminum ores;
• Electrolysis and refining of aluminum from alumina;

To produce cryolite, hydrogen fluoride is first obtained from fluorspar and then hydrofluoric acid. Aluminum hydroxide is introduced into the hydrofluoric acid solution, resulting in the formation of fluoroaluminic acid, which is neutralized with soda and a cryolite precipitates. It is filtered off and dried in tumble dryers.

Thus, alumina, which is a gray powder, is obtained. The next task is to separate pure aluminum from it using electrolysis. Now the fun begins:

2. The aluminum industry is a large consumer of carbon electrodes, which serve to supply current to the electrolyte in electrolyzers.

Almatis was previously a part of global aluminium major